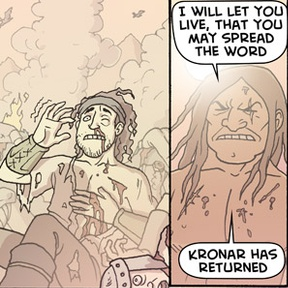 Shan-Yu: [as two captured enemy soldiers flee his presence] How many men does it take to deliver a message?
Hun Archer: [draws and aims bow] One.
— Mulan
Advertisement:

The opposite of Leave No Witnesses. After a Curb-Stomp Battle, one person (or one vessel in a naval or space battle) is allowed to Bring News Back. Sometimes this is part of a battle plan (for example, the attack is a diversion intended to draw out the enemy forces), or a Trick-and-Follow Ploy. Usually it's just to spread fear and when done by villains often a display of Pragmatic Villainy, but may also be combined with Pet the Dog.

The title is a pun on Shoot the Messenger, which may happen when the escapee reaches their destination.

Compare Sole Survivor and All According to Plan. Contrast Undead Author, where news gets out despite no one being left to deliver it. May overlap with Sparing the Final Mook.