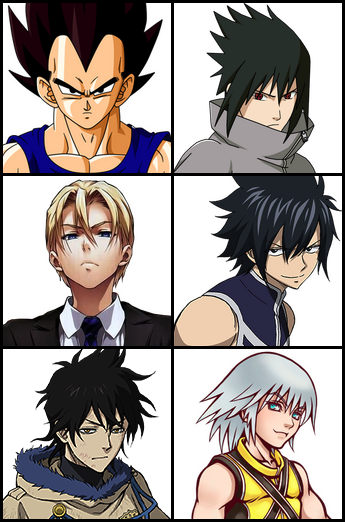 This character is usually the Privileged Rival, The Lancer (a rival who is also your teammate can make for good stories, hence why Fighting the Lancer is a thing), or even an enemy. Unlike the idealistic Stock Shonen Hero, who believes in The Power of Friendship and easily amasses True Companions, the cynical Stock Shonen Rival will believe in the power of his own strength.

In terms of power levels, the rival usually starts off stronger than the hero. As the hero grows stronger and slowly closes the gap, the rival will either become openly adversarial or pull a Face–Heel Turn, fearing that his worldview is being threatened by this nobody. Alternatively, he may believe the dark side will increase his power, which often leads to a one-on-one fight between the two. Often, the hero's optimism and strong sense of justice will make the rival question his reasons for fighting, which may trigger their own Character Arc.

There's a great chance that the Hero will triumph over the Rival in ideals if not in power. In keeping with the Shōnen Coming-of-Age Story about making friends and overcoming obstacles through sheer willpower, the Rival represents something contrary to these messages that the Hero must overcome for the story to hit home, and thus often serves as the Hero's final opponent. By the end most learn the value of friendship, or at least begrudging respect.

An encompassing trope that's usually some combination of Anti-Hero, Arrogant Kung-Fu Guy, Instant Expert, Jerkass —> Jerk with a Heart of Gold, Blood Knight, Heel–Face Revolving Door, Inferiority Superiority Complex, Reformed, but Not Tamed, Revenge, Byronic Hero, Grumpy Bear, Perpetual Frowner with the occasionally Smirk, and Evil Sounds Deep. In some cases he may also be a Char Clone. He also tends to be a Chick Magnet and Mr. Fanservice, though he will quite often be a Celibate Hero; more aware of romance and sex than the typically chaste Stock Shōnen Hero, but too brooding and serious to be romantic. He's almost definitely the protagonist's Mirror Character. On this same note, he often forms a Beta Couple with an important, but secondary female member of the gang in a Last-Minute Hookup at the end of the series; more recently, it's also become common to pair him with the female lead if she is not already romantically linked to the main character. Because the hero is usually a Primary-Color Champion, the rival will usually utilize visual tropes such as a Blue Is Heroic (Sort of), Evil Wears Black, Tall, Dark, and Handsome, or Red and Black and Evil All Over. He tends to have ice, fire, or lightning powers and more often tends to wield a blade of some sort. His dynamic with the hero tends to be the the blue to the Hero's red, Shadow Archetype.

She is a mysterious and extremely strong girl who, like Kat, is a shifter. Originally antagonistic towards Kat, she eventually becomes an ally as her motives are revealed. She has a crow named Xii, who mirrors Dusty's ability to grant her gravity powers.

She is a mysterious and extremely strong girl who, like Kat, is a shifter. Originally antagonistic towards Kat, she eventually becomes an ally as her motives are revealed. She has a crow named Xii, who mirrors Dusty's ability to grant her gravity powers.