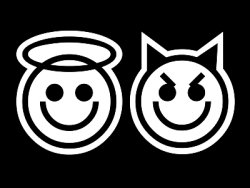 "If half an onion is black with rot, it is a rotten onion. A man is good or he is evil."
— Melisandre of Asshai, A Clash of Kings
Advertisement:

Good versus Evil. White hat versus black hat. The shining knight of light and destiny with flowing cape versus the dark mustache-twirling, card-carrying force of pure malevolence. The Republic, The Alliance, The Federation and/or La Résistance, fighting for freedom and happiness, helping the helpless, and running soup kitchens, versus the Evil Empire of oppression and tyranny run by The Legions of Hell, greedy corporate scumbags, and an Evil Overlord with a Decadent Court. The Incorruptible Pure Pureness versus the Complete Monster. The most basic form of fictional morality, Black And White Morality deals with the battle between pure good and absolute evil.

This can come in a variety of forms:

Stories using this trope usually have a Hero Protagonist and a Villain Antagonist, though this is not always the case. They're also where you're most likely to find Beauty Equals Goodness, although there are stories with black and white morality where appearance doesn't reflect morality.

While it shows up in stories of all kinds, Black-and-White Morality seems to occur frequently in media marketed for kids, due mainly to the Animation Age Ghetto, as well as all-ages works and The Moral Substitute, the latter of which doesn't allow room for any moral ambiguity. Many stories that use Black-and-White Morality tend to lean towards the idealistic end of the Sliding Scale of Idealism Versus Cynicism, but this doesn't necessarily have to be the case - in a more cynical Crapsack World, there is more black than white, but the white can at least take a sour form. Works that use both Adaptational Villainy and Adaptational Heroism, or Historical Villain Upgrade and Historical Hero Upgrade for different characters are also deliberately employing this trope to make the moral conflict simpler. Of course, usage of Black and White morality in stories won't always end up sparkling white: this moral alignment is often associated with clichéd writing and propaganda.

Of course, the prevalence of this moral system may lead to the belief that Good Is Boring. Thus, the aforementioned grey spots in a setting like this are a common Ensemble Dark Horse. Badass Decay occurs when the dark horse is whitewashed to conform to the prevailing system.

Please note even in a world where the moral lines are sharply drawn, there may still be characters or organizations that are presented as being 'grey'. A general rule of thumb as to whether or not black-and-white morality is present is that the heroes are almost always considered to be in the right, while the villains are always 'wrong'. Of course, the audience might disagree with the author's moral compass.

House Goodguys has all noble, fair, and good people. House Badguys is all evil and oppressive.

House Goodguys has all noble, fair, and good people. House Badguys is all evil and oppressive.