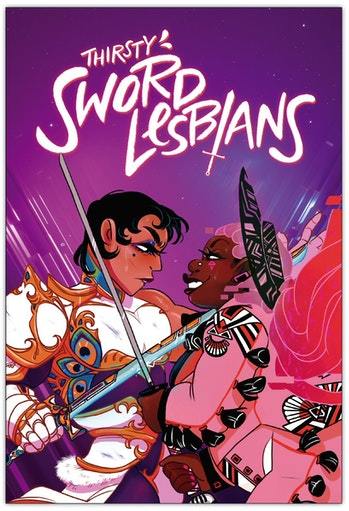 In Thirsty Sword Lesbians, you play "angsty disaster lesbians with swords," telling queer stories with friend across a variety of settings, as long as that setting involves protagonists fighting for a positive community through, love, swords, and adventure.

Thirsty Sword Lesbians is Powered by the Apocalypse and is especially influenced by Masks: A New Generation, such as having emotion-based Conditions stand in for Hit Points, and many of its Moves are based on Masks. The mechanics facilitate gameplay that encourage high emotions while maintaining the wellbeing of its participants through safety tools such as The Setting Palette and the Check-In Card.

While the game does not have a default setting, the core rulebook comes with pre-made settings and adventures written by April Kit Walsh and other contributors, with much more supplementary material planned as Kickstarter stretch goals.

In 2020, the game was funded through a Kickstarter campaign

and raised almost $300,000 across more than 8,000 backers. The campaign included a full-text preview of the game as a starting-tier backer reward.

The full game was released on June 7th, 2021. It can be bought on DriveThruRPG