Tabletop Game / They Came From Beneath The Sea! 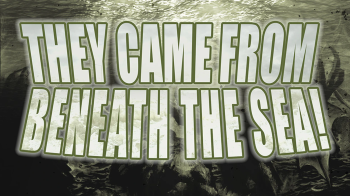 They Came From Beneath The Sea! is a Horror Comedy tabletop roleplaying game by Onyx Path Publishing using their Storyteller system, taking its inspiration from 1950s Alien Invasion B Movies in general and aquatic monster movies like It Came from Beneath the Sea, Attack of the Crab Monsters, The Monster That Challenged the World, The Alligator People, and Attack of the Giant Leeches in particular.
Advertisement:

The setting of the game is an alternative 1950s Earth where humanity has come under attack from a wide variety of threats, ranging from destructive beasts to malevolent societies with ambitions of conquest, all originating from or otherwise tied to the depths of the ocean.