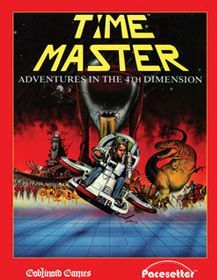 Timemaster (sometimes written Time Master) is a time travel tabletop RPG originally published by Pacesetter Games in 1984. Goblinoid Games bought the rights to both the game and the rule system in 2011, and re-released the game in 2012.

The peace treaty that ended the Time War also formed the Time Corps, an organization devoted to repairing the damage to the timestream caused by that war. Unfortunately, a lot of the mercenaries who fought in the Time War didn't see any real reason to quit living off the past, and the war had also attracted attention from an alien race known as the Demoreans. The PCs are all members of the Time Corps, whose original charter has been amended to include defending history from Demorean and renegade actions.

The game uses a combination of percentile dice and a chart to determine the results of an action, on the same line as the old Marvel FASERIP system. The same basic system was also used in Pacesetter's Star Ace (space opera) and Chill (horror/monster hunting) games.

The Timetricks supplement expanded the base rules to allow more freeform timehopping.