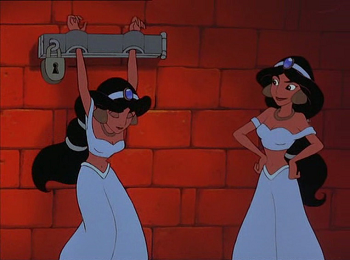 Send in the Clones!note The Jasmine on the right is Jafar, the real Jasmine is on the left.
Advertisement:

A character is replaced by a Doppelgänger (clone, robot, or just a Master of Disguise with Latex Perfection) for the purpose of espionage, assassination, or other infiltration; but the phlebotinum that makes this possible depends on a persistent connection to a living subject, making their capture and imprisonment a necessity.

This means that when the person's allies find out about the switch, they have to not only get rid of the fake, but then find a way to rescue the original. Or conversely, they can free the original, thus rendering the copy inoperative, unless it's taken on an identity of its own and become an Evil Knockoff or Robot Me, since A.I. Is a Crapshoot. A clone may also be a Manchurian Agent, leading to a Tomato in the Mirror reveal. Of course, it's entirely possible said allies might find the clone to be a Preferable Impersonator.

Rather than making a single copy, some villains will use the captive as a template to pump out an army of mooks for nefarious purposes. Some captors don't actually need to keep the original alive but do so anyway: to interrogate, as an eventual bargaining chip, because the villain has an iota of mercy (or the impersonator is the hero, not the villain). Sometimes it's completely inexplicable and the show just doesn't allow characters to get killed.

This is the Lighter and Softer version of Kill and Replace.