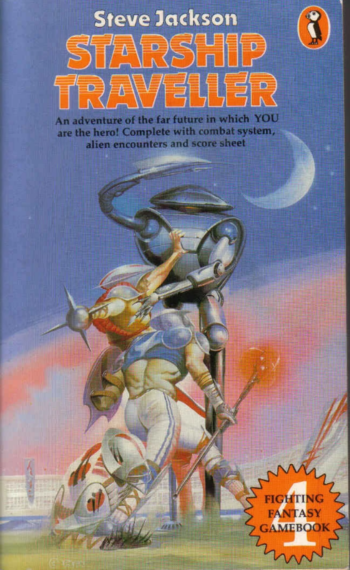 But... what about the Three Laws of Robotics?
"The fate of the Starship Traveller and her crew lies in YOUR hands!"
Advertisement:

Starship Traveller is the 4th entry of the Fighting Fantasy series of Gamebooks written by Steve Jackson, but the first entry of the franchise set in the Sci-Fi genre.

Taking place in the distant future, the space-faring vessel, Starship Traveller, has been sucked into a black hole and flung across the cosmos, into the Selstian Void far away and worlds apart. You, the hero of the story, are the captain of the Traveller, and it is your duty to navigate and explore planets and faraway worlds to find a way back to Earth.

Forfeiting the traditional Sword & Sorcery gameplay methods seen in the previous three gamebooks, Starship Traveller introduces new mechanics in gameplay, such as Phaser combat, Spaceship Battles, and a crew mechanic where you and your officers and guards fights as a team along your side.

Although a bit of an oddball, being the first of its type, Starship Traveller still manages to be a moderate success, spawning a series of sci-fi based spin-offs in Fighting Fantasy gamebooks including Space Assassin, Star Strider, The Rings of Kether and several others.

Will the Traveller and her crew find their way back to Earth? Or will her crew be doomed to roam the Selstian Void... forever?