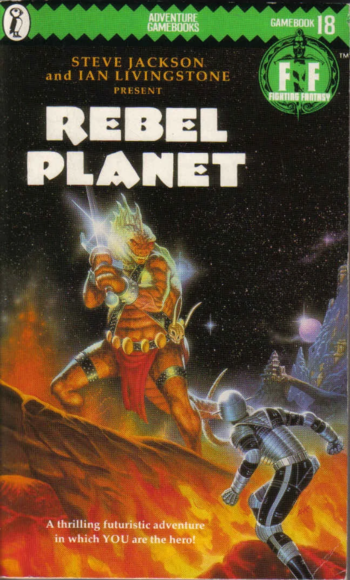 In the year 2453, humans have been defeated in an epic battle against the Arcadians, a race of hostile aliens, and subsequently having the planet conquered by the Arcadian forces. Now, mankind have to co-exist as slaves and servants to the aliens. To the Victor Go the Spoils, and for centuries after the initial encounter and battle against Arcadians, Earthlings have submitted completely under alien rule. Humans are no longer the dominant rulers of Earth.

You are the best officer of SAROS, and you have volunteered for this mission. Trained in various martial arts, equipped with a forbidden laser sword, your mission is to seek out all the underground resistance and piece together the vital code you need to destroy the enemy. Only YOU stand in the way of the Arcadians' domination of the galaxy!

Rebel Planet is the 18th entry of the Fighting Fantasy series of Gamebooks, written by Robin Waterfield. Having experimented with Science Fantasy thrice (Starship Traveller, Space Assassin, The Rings of Kether), Rebel Planet is the franchise's attempt to delve into an adventure of a more epic scale, involving a full-scale war against a hostile alien empire. Being the peak of the franchise's run into science fiction, fans of the series often considers Rebel Planet to be Fighting Fantasy in space at its best and sets a high bar for subsequent attempts of the series into sci-fi themed adventures.

Has a video game adaptation on the ZX Spectrum