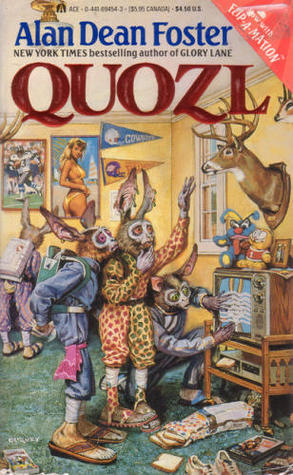 A standalone SF novel by Alan Dean Foster. The eponymous aliens are human-sized marsupial rabbits that slowly colonize the galaxy traveling in Generation Ships. Earth was going to be their sixth colony.

Their first shock was discovering another sentient species. The second was actually meeting one specimen and finding how good primitive human guns are and how hard it is to kill a rampaging human. The third was... the author tries to keep it secret until the end, but it is rather predictable. Taking this into account, Quozl rulers decided the colony to stay a small underground "Burrow" deep in a national park somewhere in the wilderness of North America. Contacting humans was forbidden.

One important thing about Quozl society is being "open" in areas where humans are "repressed". They love graphic depictions of violence, like historical battles where warlords are gutting babies. They copulate for recreation 20-60 times a day (which isn't as much as you'd expect — Quozl can do it over a dozen times during a human "quickie"). This is stated to improve their mental health.

Shortly after the landing a couple of Quozl left the colony, desiring to live in the open air. They were never heard from and were considered dead from the elements.

Then a human boy accidentally met a Quozl boy. And then they grew up, met again and became friends. And then things got out of hand.