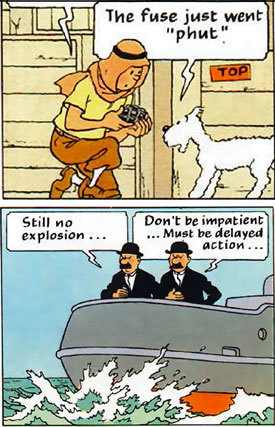 "Where's the kaboom? There was supposed to be an Earth-Shattering Kaboom!"
— Marvin the Martian, Looney Tunes
Advertisement:

The good guys have set up a bomb that they plan to use to destroy the Evil Overlord's whole fortress. They get safely outside the blast radius, evading a wave of Mooks, and The Hero holds the detonator high so the Big Bad can see, ready to take out the entire pursuing Legion of Doom, and...

Nothing. The detonator has failed at the worst possible time, leading someone to have to go back and activate the explosive/device manually. Or worse, the enemy simply dismantled the bombs or jammed the detonator before they could be set off, and gets to rub the heroes' faces in it. Usually Played for Drama rather than comedy. One exception is in cartoons, where the bomber will inevitably go back to check, and have it explode (harmlessly) in his face.

This is the trope you really want to invoke when a Land Mine Goes "Click!"

[Trope Namer] Bugs takes the Illidium Q-36 Explosive Space Modulator before it detonates. Marvin's comment afterwards is the Trope Namer for this and Earth-Shattering Kaboom.

Alternative Title(s): Where Is The Kaboom, Detonation Failure

[Trope Namer] Bugs takes the Illidium Q-36 Explosive Space Modulator before it detonates. Marvin's comment afterwards is the Trope Namer for this and Earth-Shattering Kaboom.