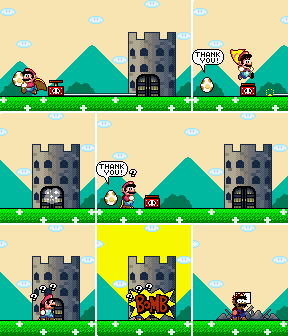 "Where's the Kaboom? There was supposed to be a castle-shattering ka—" *BOOM*
Advertisement:

Stuff Blowing Up in Real Life tends to be sudden and brief. But "sudden and brief" makes for poor television and film, particularly when setting the scene up is something of a money sink. Thus, explosions are inexplicably delayed, slowed down or otherwise manipulated to get the desired effect. The defining characteristic is a delay between the cause of the explosion and the explosion itself. Hovering a finger over the detonator button doesn't qualify. This delay may be a fraction of a second or several minutes. Outrun the Fireball is one incarnation of this trope.

There are several flavours of delayed explosion that the connoisseur can enjoy: