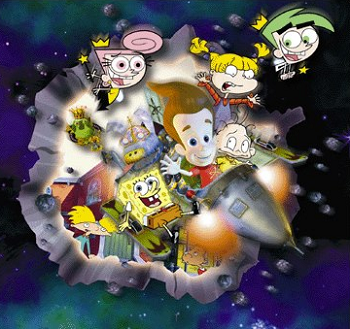 Crossovers galore.
Carl Wheezer: 10- let's not do this! 9- how about we go home? 8...
Jimmy Neutron: The heck with the countdown! We gotta blast!
Advertisement:

Jimmy Neutron's Nicktoon Blast was a family-simulator ride at Universal Studios Florida that opened on April 11, 2003, replacing The Funtastic World of Hanna-Barbera.

Based on The Adventures of Jimmy Neutron, Boy Genius as well as other Nickelodeon properties of the time, the ride was set inside "Nicktoon Studios", where Jimmy Neutron, with assistance from Carl Wheezer and Goddard, is preparing to show off his latest rocket design, known as the "Mark IV". Things are suddenly interrupted when Ooblar breaks in and steals it, as well as revealing the plan he and King Goobot have formed: to duplicate it and create a massive army to conquer Earth. Jimmy Neutron quickly enlists the guests to help him in getting the rocket back. The rocket chase results in encounters with numerous Nicktoons, most notably including Hey Arnold!, Rugrats, The Fairly OddParents, and Spongebob Squarepants.

Compared to its predecessor, Jimmy Neutron's Nicktoon Blast did not last as long; it closed after eight years on August 18, 2011. It was replaced with Despicable Me: Minion Mayhem.

Here's a video of the ride.