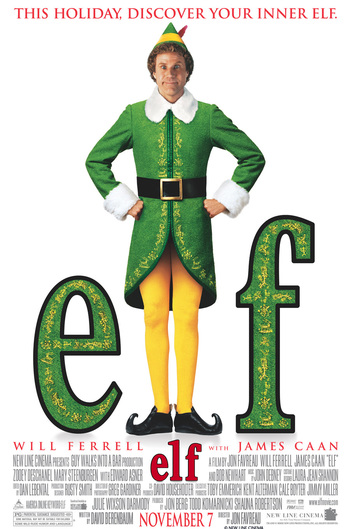 #1. "Treat every day like Christmas."
#2. "There's room for everyone on the 'Nice' list."
#3. "The best way to spread Christmas cheer is singing loud for all to hear."
—The Code of the Elves
Advertisement:

Elf is a 2003 Christmas comedy film, directed by Jon Favreau from a screenplay by David Berenbaum and starring Will Ferrell.

Ferrell stars as Buddy, a human who was raised by Santa Claus (Edward Asner), Papa Elf (Bob Newhart), and the rest of the elves at the North Pole after accidentally crawling into Santa's sack at the orphanage where he was left as a baby. Realizing that he's not competent as an elf and discovering his true lineage, he decides to head to New York City to meet his deadbeat birth father Walter Hobbs (James Caan), an executive at a children's publishing firm. Walter initially doesn't believe Buddy is his son, but eventually brings him home to meet his wife Emily (Mary Steenburgen) and their son Michael (Daniel Tay), who are won over by Buddy's innocent charm.

Buddy's adventures in the city include taking a seasonal job at Gimbels department store, where he has a confrontation with a fake Santa and falls in love with Jovie (Zooey Deschanel), a fellow store employee dressed as an elf. Meanwhile, his father gradually begins to warm up to him. But after Walter — who's under heavy pressure from his boss due to lackluster quarterly sales — yells at him for accidentally screwing up a book deal with a famous but temperamental children's author (Peter Dinklage), Buddy runs away, feeling he never belonged in New York.

Santa's sleigh then crashes in Central Park, where the big man himself tells Buddy that a lack of Christmas spirit has caused the engines to fail. Now it's up to Buddy to repair the sleigh and get everyone to believe in Santa before Christmas is ruined.

A big commercial and critical success on its release, Elf continues to be seen as a funny, charming, and (mostly) family-safe Christmas movie, and is widely regarded by critics and general audiences alike as one of the best Christmas movies of all time. A musical Screen-to-Stage Adaptation had limited, holiday-season engagements on Broadway in 2010 and 2012 and has since launched a touring production. An Animated Adaptation, Elf: Buddy's Musical Christmas, aired on NBC in 2014.