Bad to the Last Drop 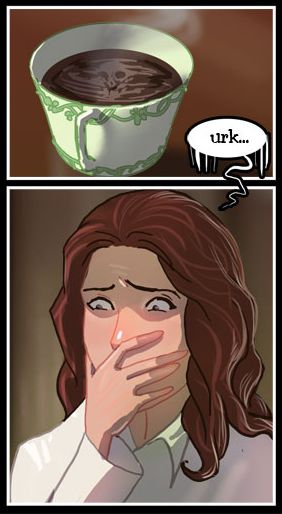 Tommy: Chuckie! This coffee tastes like mud!
Chuckie: It is mud.
— Rugrats, "What the Big People Do"
Advertisement:

Good coffee can be a connoisseur's delight, while bad coffee is Bad to the Last Drop. It might be very cheap, very poorly brewed, or very stale coffee, or it can be ersatz substitutes for coffee that just don't make the grade.

To some extent, even good coffee is an acquired taste; many people load it up with cream and sugar when they first start drinking coffee for this reason. That's not this trope. This is when the stuff's so awful that if the drinker wasn't in the midst of a Must Have Caffeine moment, it would be thrown out.

Sometimes subverted by characters who argue that coffee should be cheap and poorly brewed, and call anyone invoking this trope on such beverages a snob.

The trope name is an allusion to the Maxwell House slogan "Good to the Last Drop".

While this trope most commonly features coffee, any bad non-alcoholic drink can go here. Bad alcoholic drinks should see the Sister Trope, A Tankard of Moose Urine. Klatchian Coffee may overlap with this, or simply be another Sister Trope. Descriptions of such beverages may be some variant of "It Tastes Like Feet."