Literature / The Elves and the Cobbler 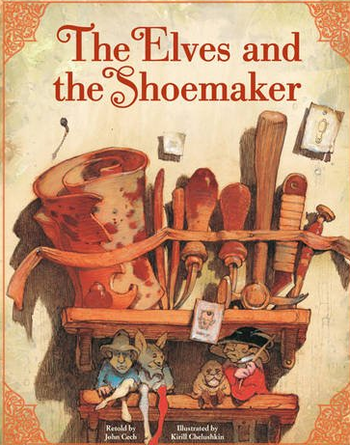 "The Elves and the Cobbler" (or "The Elves and the Shoemaker", "The Shoemaker and the Elves") is an often copied and re-made fairy tale about a poor shoemaker who receives much-needed help from elves. It is best known from the Brothers Grimm fairy tales, where it was included as entry no. 39 as "Die Wichtelmänner" ("The Gnomes").

The fairy tale follows a poor cobbler with ailing sales. One night he wakes up to find the shoes he had planned to create in the morning already made, and much to his fortune a customer comes in and pays more than usual for the shoes. This gives him enough money to buy materials for two pairs of shoes, which he again finds already finished on the counter the next morning.

The pattern repeats for several days, and the poor cobbler's fortunes turn as his shop becomes famous. But one night the cobbler and his wife hide in the shop so they can see who has been creating the shoes for him. To their astonishment, they see a group of little elves, who are naked (or in most modern retellings, wearing ragged, dirty clothing and barefoot). In gratitude, they leave gifts of shoes and little clothes, watching again to see the elves happily accept their new finery. Thereafter they do not come again, but the cobbler no longer needs their help and considers their joy his reward.

The tale has inspired many adaptations and popular culture references. Animated short adaptations include Jolly Little Elves by Walter Lantz in 1934, and Tex Avery's 1950 MGM cartoon short The Peachy Cobbler. The house-elf Dobby in Harry Potter and the Chamber of Secrets, who can only be freed from his drudgery with a gift of clothing, is another reference to this fairy tale.

Tropes in "The Elves and the Cobbler":

Alternative Title(s): The Elves And The Shoemaker, The Cobbler And The Elves