Literature / The Sword of Shannara Trilogy 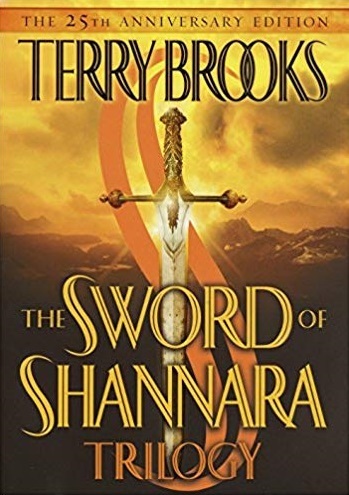 Often referred to as the "classic trilogy" or simply the "Shannara trilogy", these three loosely-linked Doorstopper High Fantasy novels launched Terry Brooks' writing career. Set in Brooks' now famous Shannara universe, the three novels deal with three different generations of the Ohmsford family, their ties to the Elven House of Shannara and its magic, and their relationship with the enigmatic Druid, Allanon.
Advertisement:

In Sword Of Shannara, Allanon arrives in the sleepy hamlet of Shady Vale with the news that The Warlock Lord, Brona, an evil former Druid, has returned to life. Only the fabled (and eponymous) Sword of Shannara can rid the world of his threat for good, and only a member of the House of Shannara can wield the sword. As it turns out, Shea Ohmsford is the last living heir of the house. Along with his brother Flick, their friend Menion Leah, and diverse others, Shea and Allanon set out to look for the Sword.

On their way to Paranor, home of the Druids, disaster strikes. Shea is separated from the group. Forced to team with thieves Panamon Creel and Keltset, Shea sets off to recover the sword on his own, while his friends attempt to avert Brona's conquest of the Four Lands. Many adventures and one Hell of a twist ending later, Shea recovers the Sword and puts Brona in his grave permanently.

Flashforward fifty years to Elfstones of Shannara. The Ellcrys, the tree that keeps the Demons of legend sealed up within the Forbidding, is dying, and her Chosen are massacred by the escaping Demons. The sole Chosen remaining, Elven Princess Amberle, must travel to the mythical Bloodfire and resurrect the Ellcrys. Realising that he will be needed to help the Elves defend their home from the Demons, Allanon visits the Gnome town of Storlock, intent on strong-arming Shea's grandson Wil into serving as Amberle's bodyguard, since he inherited his grandfather's magic-destroying Elfstones.

Wil soon agrees. He and Amberle set off, with the Nightmare Fuel-inspiring Reaper in hot pursuit. In the meantime, Allanon, Elf King Eventine, and Eventine's son Ander gather what few allies they have and prepare to fight a delaying action against the armies of the Demon Lord known as The Dagda Mor. In the end, a new Ellcrys is created, the Demons are banished, and all is well.

Twenty years after that, in The Wishsong of Shannara, the Mord Wraiths appear. In possession of the Ildatch, the same Tome of Eldritch Lore that corrupted Brona, they seem poised to destroy the Four Lands. Even Allanon cannot penetrate the defences they have raised around the book, and all seems hopeless. Falling back into his old habits, Allanon calls upon Brin Ohmsford, who, thanks to her father's use of the Elfstones, possesses the Reality Warping Wishsong. Unlike Allanon, Brin will be able to use the Wishsong to enter the Maelmord and destroy the Ildatch; she and her Love Interest Rone Leah set off with Allanon in order to do so.

Meanwhile, her brother Jair, who possesses a lesser version of the Wishsong, is told by The King of The Silver River that Brin will fail if he does not go to her aid. Alongside reluctant Gnome Tracker Slanter, and uber-badass Garet Jax, as well as numerous others, Jair goes after Brin. In the end, Brin is saved, and the Ildatch destroyed, albeit at tremendous cost. The Magic Goes Away...at least until the next series.

While the first book has been criticised for being too similar to The Lord of the Rings, the later books are generally regarded as better, and the trilogy as a whole was very successful. It's best described as good quality pop-fantasy. There are now a number of stories set within, just before, or just after the books in the trilogy. They include the short stories Allanon's Quest, The Weapon Master's Choice, and The Black Irix (collectively known as Paladins of Shannara), the novella Indomitable, and the graphic novel Dark Wraith of Shannara.

For those interested in the history of the fantasy genre, it should be noted that The Sword of Shannara was the first high fantasy novel not written for children to be a commercial success in its own time (that's right; The Lord of the Rings was not a commercial success until many years after it was published), and Elfstones and Wishsong were numbers two and three, respectively; all three spent weeks on the New York Times best-seller list. This was largely what convinced publishers that fantasy could be a commercially viable genre separate from sci-fi, causing an explosion in the publication of fantasy.

for the character sheet.