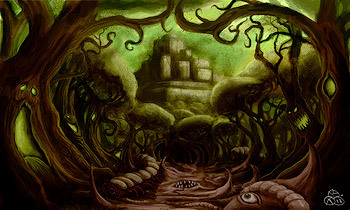 Salazar: So Mr. Kennedy, do you like my garden?
Leon: I see you've been able to work in some of your twisted taste, here, too.
— Resident Evil 4
Advertisement:

A Garden of Evil is a distinctly unpleasant place to be, where all forms of life within are poisonous, corrupted, and extremely deadly. Often populated by sinister research (scientific or magical) experiments run amok, the garden can also serve as a protective barrier for a villain's lair. This is the plant life of Mordor. There is probably a hedgemaze — quite possibly mobile. The place may be under a Curse. Very likely to be home to a Botanical Abomination.

Scale can vary greatly. A common type of Death World consists entirely of this. In instances where the garden grows, expect The End of the World as We Know It. See The Hedge of Thorns, When Trees Attack and Lost in the Maize. Plant Mooks, Alien Kudzu, a Man-Eating Plant and Meat Moss can often be found growing here. No relation to the Garden of Sinners. Contrast Last Fertile Region, Garden of Love, and Garden of Eden (usuallly).

This is just one of the hazardous plants on Floor 7

This is just one of the hazardous plants on Floor 7