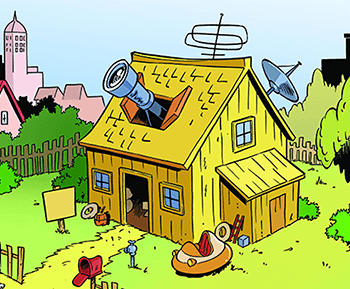 How do you quickly communicate to your audience how smart the Gadgeteer Genius, Mad Scientist, or Bungling Inventor is? By filling their house with time-saving devices of their own creation, of course.

Consider Bob. Bob has a bathroom with a machine that helps him brush his teeth. He also has a machine that automatically styles his hair for him. Bob also has a foot-activated door-opener. His lamps also have built-in gadgets that assist in the maintenance of the house and also gives Bob materials he will need for the day.

A sub-trope of Cool House. Contrast with Mad Scientist Laboratory, though there may be one of those in the basement as well. In television or film, expect some of the gadgets to be Cow Tools - even the authors and/or set designers don't know what they are supposed to be for. Compare Rube Goldberg Device.