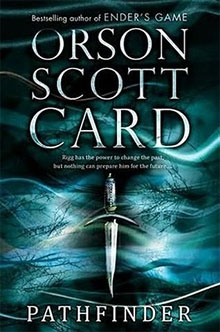 Pathfinder is a 2010 fantasy/sci-fi novel by Orson Scott Card. There are two parallel stories: The main plot concerns Rigg, a boy with the ability to see "paths" left behind by all living creatures when they move, and how he gets caught up in a political struggle for the fate of the known world. The second story deals with Ram, the pilot on a colony ship heading out from Earth to colonize a new world, equipped with an experimental hyperdrive, and his interactions with the ship's computers and the Expendables, a group of androids that interface with the computers and serve as advisers.

Fairly early on Rigg learns that he's not the only one with unusual powers, and that there's a way to use his ability to not only see the course of people and other life from the past, but to interact with them and change the past as well. So of course many Time Travel Tropes get used, though the author's note explains that he wanted to "embrace" paradox rather than avoiding it, so expect to see the Time Travel Tropes get played with.

A sequel, Ruins, and a third book Visitors were released later. Beware. This is an Orson Scott Card book, and so of course the plot gets very twisty. Even reading the trope example names could result in spoilage.

Totally unrelated to either film of the same name,, the series of role-playing game manuals, or a 2018 CRPG based on them.