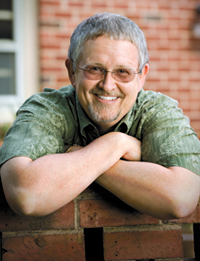 Orson Scott Card (born August 24, 1951) is a science fiction author, best known for the book Ender's Game and its spinoffs. Card is the only author to have won both a Hugo Award and a Nebula Award in consecutive years; the books that achieved this are Ender's Game and Speaker for the Dead, respectively; he is also one of exactly eight people to have won more than two Hugos. After 28 years, Ender's Game was released as a film.

He teaches creative writing at Southern Virginia University, where he works with colleages to change the paradigm for English and Writing education methods. He also runs an invitation-only annual "boot camp" for writers, of which some participants have gone on to successful writing careers. He has dedicated large amounts of his time to assisting aspiring writers, and those who have been lucky enough to be taught by him often cite him as a contributor to their success. He is also a Browncoat. According to his blog, he is also a fan of animated films, as well as Avatar: The Last Airbender after being convinced to watch it by his daughter. More recently, Card wrote an article for a newspaper in which he said Cowboy Bebop was better than "all but a handful" of sci-fi films.

He is a practicing Mormon, and dabbles in LDS fiction alongside his better-known sci-fi.

While genuinely famous for his novels, Card's place in recent science-fiction news can be traced in part to his right-wing politics, particularly his vocal opposition to same-sex marriage and relations. Although for the most part his politics are separate from his fiction, there are exceptions, most notably with the book Empire.

Card's most well-known series, mostly due to the first book Ender's Game. The series branches off from there:

A fictionalized account of 1st and 2nd Nephi, and Alma from The Book Of Mormon

. From a Mormon perspective the Homecoming Saga is semi-historical fiction set IN SPACE!.

An intergalactic story on a similar scale to the Dune universe. Originally composed of short stories and then later collected into a (more-or-less) coherent narrative. They center around Jason Worthing, The Empire's most famous space pilot — and its most dangerous one, primarily because he has "the Swipe." His Trickster Mentor, Abner Doon, sends him out to found a new colony while he quietly causes The Empire (and thus the known universe) to collapse back into the Dark Ages. Worthing's colony eventually develops into a telepathic powerhouse who consider themselves guardian angels of the human race, removing memories of suffering and pain with their out-of-control powers. Jason makes them cut it out, which is where the events of the first novel start.

The Tales of Alvin Maker

A fantasy/Alternate History series set in an alternate America where folk magic works.

A tie-in to the Shadow Complex video game. The series is a political what if? story where a secret conspiracy plots to plunge America into a second Civil War based on Red vs. Blue state politics.

The Women of Genesis series

Historical fiction, leaning more towards fictional. These books are novelized accounts of the lives of women in the first book of the Bible (namely Sarah, Rebekah, and Rachel). While they stay as true to the Biblical account as possible, they include many details that were invented for the novels.

Stone Tables, a fictionalized account of Moses, is often included with these books despite being written far earlier in his career (and of course not being about a woman- although Moses' wife makes a significant impact on the book).

Works by Orson Scott Card with their own pages include:

Other works by Orson Scott Card contain examples of:

The Women of Genesis