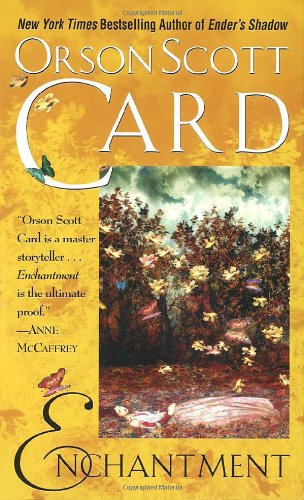 A novel by Orson Scott Card, re-staging the "Sleeping Beauty" myth in a new setting.
Advertisement:

Ivan Smetski is a Russian Jew who isn't going to be Russian anymore: as soon as possible, his parents are emigrating to America, specifically a suburb in New York State, where Ivan will eventually grow up. Before they leave, though, his family sojourns at Cousin Marek's house, where Ivan, exploring in the woods, comes across an incredible tableau: a beautiful woman, sleeping on a bier, amidst a lake of leaves in which lives a giant bear. He doesn't get a chance to explore this until 1991, more than a decade later, when he returns to what was once the USSR but is now Ukraine to do a dissertation on Russian Mythology and Tales and whether they conform to Propp's Functions of Folktales. While there, he visits Cousin Marek's farm and re-discovers the beautiful woman, who—after the bear has been subdued—needs to be awoken with a kiss...

"...And then they lived Happily Ever After?" Nope.

First off: Our maiden? Princess Katerina of Taina, a 9th-century Slavic kingdom growing in the shadow of proto-Kievan Rus' and unremembered by history, which tells you what its long-term fate will be. Ivan has promised to marry Katerina, and that marriage promise is all that is keeping the evil witch Baba Yaga from using Loophole Abuse to claim rulership of Taina. She's already enslaved Bear—The Bear, the god of winter—to be her Dragon and do her bidding, so keeping her at bay is not an idle concern for the citizens of Taina. Especially since their most-loved deity, Mikola Mozhaiski (a version of Saint Nikolaus), hasn't been seen in years. Second: Ivan? Not a Knight in Shining Armor. A man of good heart, yes, and a decathlete, fit by the standards of The '90s... But this is The Low Middle Ages, Russia in 890 AD, and manhood involves being able to sling around five pounds of sword for hours at a stretch. Oh, and he's engaged to a girl named Ruth, back home in 20th-century America—and he's a Jew. And Taina? An outpost of Christianity, many years before (20th-century) scholars believed it had gotten that far east. Even better, the local priest was an apprentice to Kirill—Saint

, after whom the Cyrillic Alphabet is named—and has some of Kirill's manuscripts. Ivan, a linguist, came to (modern-day) Russia in part to answer how the Russian tongue evolved from Old Church Slavonic

. In 9th-century Taina, he literally holds the answers in his hand.

So now Ivan is stuck in Taina, and has has to figure out what to do with Katerina (as opposed to Ruth), figure out how to win the respect of the townsfolk, avoid Baba Yaga as much as possible... and, preferably, get back to his own time and his own life and his actual fiancée so that he can go on with all that, instead of being trapped in a 9th-century backwater where magic, rather obviously, exists. And, uncomfortably, he is in fact attracted to Katerina, and she to him. Oh, and, Baba Yaga's out to get both of them. And so we have our adventure: a fun fairy tale, a workable Romance Novel, and speculations on just how Baba Yaga got her reputation for having a house on chicken legs.

No relations to the Disney film Enchanted, though both are affectionate Deconstructions in which fairy tales collide head-first with modern-day New York citizens. OSC's novel, however, lacks Crowd Songs.