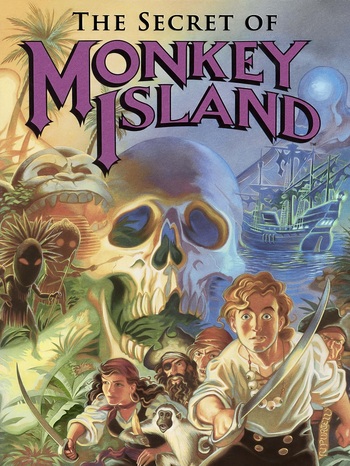 "Three small trials and you're a pirate like us." Fair enough. If only I could stomach the foul brew these scurvy seadogs swilled, the rest would be easy. How could I have known I'd meet a powerful and beautiful woman with a jealous suitor too stupid to realize he'd been dead for years? And how can I crawl through this great stone monkey to find a man who walks three inches above the ground and sets fire to his beard every morning?
— Excerpted from The Memoirs of Guybrush Threepwood: The Monkey Island Years
Advertisement:

The first game in the Monkey Island series, The Secret of Monkey Island, was released in 1990. The game begins as our hero, Guybrush Threepwood, finds himself on Mêlée Island™, with one clear objective on his mind: Becoming a Mighty Pirate™. To become one, he must first pass "The Three Trials", and while doing so he learns of Elaine Marley, the local governor, and her story with the notorious ghost pirate, LeChuck, who now terrorizes the waters around Mêlée Island™ together with his undead crew. After passing the trials, Guybrush finds out Elaine has been kidnapped by LeChuck, and he must now set sail for LeChuck's lair which lies on the titular Monkey Island™ in order to save her.

Way later in 2009, LucasArts got back in the Adventure Game business (finally redeeming themselves in the eyes of adventure fans) by remaking the game, complete with voice acting by the cast of The Curse of Monkey Island.

Example of:
Cannot Talk to Women