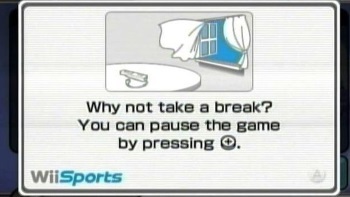 But I want to keep playing "Box"! It's just too fun!
"It's also important to be able to control your bodily functions. You never know when a long demo is about to begin, so make sure you're prepared to sit in front of the monitor for a long time if necessary. If you're feeling drowsy, you should get some sleep."
— Master Miller, Metal Gear Solid
Advertisement:

"Poopsocking" is when a gamer is so engrossed in their game, they won't stop playing for any reason, even to go to the bathroom — so they'll poop in a sock. It's not the only manifestation of this kind of behavior (a common variant is a gamer who drinks a lot of soda and then pees in the cans, and the term "catassing" derives from a player whose house stinks because they've neglected basic chores like cleaning their cat's litter box), but the principle is the same — a gamer plays so long that it starts negatively affecting their quality of life. Therefore, Anti Poop-Socking is when a game has a built-in function that rewards the player for taking a break from the game... or at least encourages them to.

There are several reasons for a game to want the player to take a break. One of the biggest is that not doing this leads to bad publicity. There are real dangers to poopsocking; it's clearly not healthy to be playing video games for that long, or to surround yourself in your own waste products. The media will usually bring out the rarest and most horrifying cases, like players who literally play themselves to death because they neglected basic needs like food and water, babies who died because their parents were too preoccupied with playing video games to care for them, or players who have allowed their own messes to turn into literal piles of garbage; games which are commonly associated with this sort of thing might implement anti-poopsocking measures to disassociate themselves from these extremes. Games with a particular risk of eyestrain after long sessions (often using 3D effects, like the Virtual Boy) may implement anti-poopsocking for this reason as well.

But there are also practical reasons to do this. From a pure gameplay perspective, it discourages players from Level Grinding too quickly and disrupting the ability flow of the gaming population. Furthermore, long video game sessions can lead to burnout, and burned out gamers are less likely to pick the game back up again, so by encouraging gamers to take a break every now and then, games end up becoming even more addicting.

And one of the biggest motivators is money. Online games have limited bandwidth, and so game companies prefer less frequent players, especially if they pay monthly subscription fees (and thus would pay the same as a hardcore gamer, so no loss there). Ad-driven games want to prevent burnout because repetition is key in advertising; companies get more value out of a gamer who sits through several short gaming sessions than one who plays a single marathon session.

There's one big hole in the anti-poopsocking mechanism: there's nothing preventing a gamer from playing multiple games, staggering them so that they're playing one game while racking up the anti-poopsocking elements of the others. Some people will not be helped. Of course, this is all even truer in the many cases where the poopsock-preventative procedure in question amounts to little more than a suggestion on the game's part - oftentimes a friendly reminder to take a break delivered through some manner of character dialogue.

See also Just One More Level! (the phenomenon that leads to poopsocking), Hikikomori (the kind of people who would poopsock), and Anti-Grinding (a related phenomenon that tries to prevent gamers from Level Grinding and can have incidental anti-poopsocking rewards as well). Contrast Bladder of Steel (when you can't take a break even if you want to) and Guilt-Based Gaming (where the game tries to guilt you into not taking a break). And compare and contrast Play Every Day (you get rewarded for taking a break, but also for picking right back up the next day).