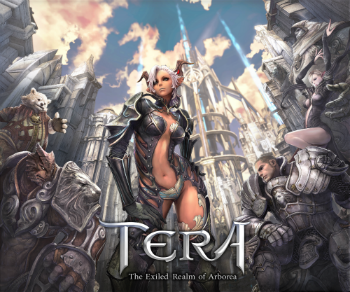 "The Valkyon Federation was created to defeat the argons, because if we can’t win the war, our world is doomed. What we need to remember, though, is that if we win the war but can’t win the peace that follows, the federation itself is doomed."
Fraya, Allemantheia Commander
Advertisement:

The Exiled Realm of Arborea, or TERA, is a Korean action MMORPG by Bluehole Studios. Built on the scrapped source code for what would have been Lineage III, TERA uses a real-time battle system instead of the standard MMO fare of a plethora of action keys. Players can Hack and Slash, Cast Magics, Dodge, and Block, all in real-time and with no breaks.

A millennia ago, the two gods Arun and Shara met in the void and fell asleep. As they slept, they dreamed, and as they dreamed, the world of Tera was formed. First came twelve gods, who all battled fiercely for control of Tera. Born into the conflict were the mortal races, dragged into the divine wars and ever at the heels of the gods. The divine wars lasted for centuries, and took its toll on mortal and god alike.

The divine wars ended with most of the gods dead, imprisoned, or diminished. The remaining mortal races took over control of Tera, and with the recently formed Valkyon Federation, old wounds are finally starting to heal. But in this peace, trouble has arisen: to the north, the metallic race of argons have surfaced and threatens to terraform the world to their liking, and the mysterious Island of Dawn has suddenly risen at the center of the world.

The Player Character enters this world to fight these mysterious menaces. Players can choose from one of seven races, eleven classes, and explore the world either alone or in groups. The game was released on January 25, 2011 in Korea, August 18, 2011 in Japan, and May 1 and May 3, 2012 for North America and Europe respectively. Other markets planned for release are China and Thailand.

The US and European versions of the game have been free-to-play since early February 2013, now with the new title TERA: Rising.

TERA officially shut down on June 30th, 2022. However, several private servers are available for people who still want to play.