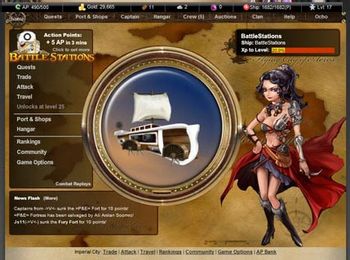 A flash-based online game, with the concept of the player as an airship captain out to make their way in the world. Despite having functional airships, most settings and items in the game are portrayed as being low-tech. Offers multiple styles of gameplay, five classes, and a wealth of equipment.

The game was designed as a social networking application. Started out on Facebook, but has since been added to MySpace and Friendster. Notable in having deeper gameplay than most social networking games. Facebook version is the best supported, with the developers being active in the Facebook community.