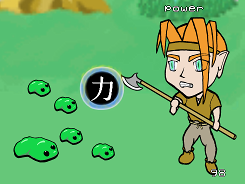 Feel the power of my mighty kanji!* The symbol in the image is a kanji character

, and it means "power

Slime Forest Adventure, or "Project LRNJ," is a retro-style RPG for PCs. To win, you must learn the Japanese language. Not your character; you, the player.

Enemies attack by throwing Japanese at you. You have to respond by typing the correct meaning or pronunciation (whichever is asked for). If you make a mistake, you lose health, after which the correct answer (usually with a mnemonic) will be displayed.