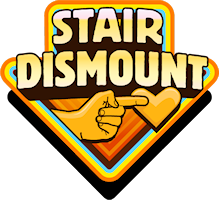 Stair Dismount is one of the most famous freeware games to come out of the Finnish demoscene, and has the honor of being one of the first computer games whose gameplay is built heavily around an interactive real-time physics engine, predating Half-Life 2 by several years.

For being such an important game, it's surprising that its gameplay consists near-entirely of nudging a ragdoll down some stairs. No, really.

Originally developed by the demo group tAAt and featured as the winning entry at the Assembly demoscene game development contest, Stair Dismount (originally named Porrasturvat, more-or-less meaning 'Falling-on-your-face-on-some-stairs') stars a superhero by the name of Spector (also known as Mr. Dismount), who finds himself in a need to repay his city for the damages he's caused while fighting crime, and is forced to commit tax fraud by repeatedly injuring himself to show that he himself is just as battered as the city he was trying to protect.

His method of choice? Throwing himself down a flight of stairs. Repeatedly.

All the above is essentially an Excuse Plot, because nowhere in the actual game is there any evidence who the guy is or what he does. The gameplay is fairly simple too: Pick a body part, the force of the push and angle, and watch the guy fall down the stairs. The trick, of course, is to see just how much damage you can cause at once, and finding the optimal pushing angle.

Several versions of the game are now available, such as Truck Dismount which replaces the stairway with a moving truck, allowing the player to place their ragdoll anywhere they like in the general vicinity of the truck, and to add obstacles and ramps in the truck's way for maximum destruction. Ports for iOS and Android is now available as well, with many different ragdolls and levels.