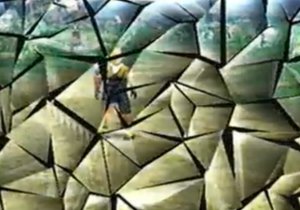 We interrupt this adventure to bring you this important Random Encounter!
"FIGHT IT OUT!"
— Captain SNES: The Game Mastanote Who took it from Ogre Battle, but since that game just used standard wipes, it's Not an Example. Captain SNES at least had the good sense of using a blurring effect when the line was called.

Graphic effect where you hit a Random Encounter and the screen flashes, breaks, or does another psychedelic transition before revealing a generic backdrop (usually themed according to the environment) upon which the actual fighting takes place. At the same time, the area's background music abruptly stops while the Battle Theme Music kicks in.

While most games use a single transition sequence when fading from scenery to combat, some games may provide variations depending on context. Sometimes the Fight Woosh occurs without interrupting the background music; sometimes the game may provide a different transition before a Boss Battle, or the transition itself may hint that one side (either player or enemy) is going to get an advantage (such as a preemptive strike) at the start of battle.