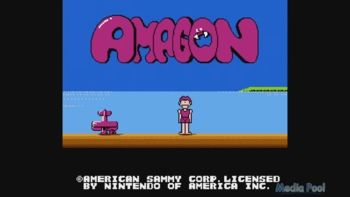 The title screen.
A 1989 Platform Game for the Nintendo Entertainment System, developed by Aicom.
Advertisement:

Amagon is a run-of-the-mill Marine who has the unfortunate luck of landing on a deserted island, armed with only his trusty machine gun and 300 bullets. Said deserted island is overloaded with spiders, scorpions... and anthropomorphic beasts? Who are, sure enough, all out to get Amagon. The good news is, Amagon spies a boat on the crescent-shaped island, which could lead to his escape. The bad news, of course, is that it's on the complete opposite end of the island from where he lands. Though one more bit of good news for him - there's an item to be found on the island called the Mega-Key (well, Mega-Ki is more likely, since the icon isn't actually a key...), and by getting it, he can turn into a musclebound-behemoth whose punches pack a wallop well beyond what his gun can do.