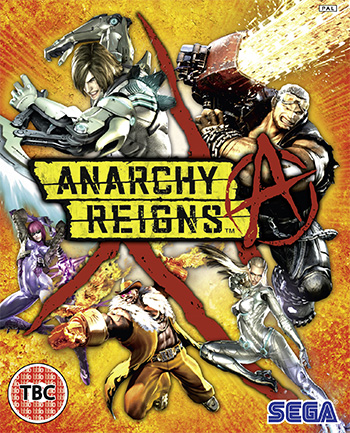 We don't help people. We KILL THEM!
Advertisement:

Anarchy Reigns (known as Max Anarchy in Japan) is a multiplayer online beat 'em up game by PlatinumGames for the PlayStation 3 and the Xbox 360. It is a pseudo-sequel to the Nintendo Wii game MadWorld, using several of the same or similar characters in a separate canon.

The story begins when Maximillian Caxton, an enigmatic cyborg and the mentor of Leonhardt Victorion, is suspected of murdering several people. Leo is charged with bringing Max to justice, while Max's daughter pleads with Jack Cayman to save her father.

Anarchy Reigns is the first title by PlatinumGames to contain multiplayer features. There are over ten different modes of play, including Capture the Flag, Deathmatch, Battle Royal (16 Player free-for-all), and Deathball.

This game was released on July 5th, 2012 in Japan, but did not get a Western release until January 8th, 2013. In April of 2013, DLC was released, allowing players who didn't preorder the game to unlock Bayonetta and adding two more multiplayer modes, Mad Survival and Dogfight.