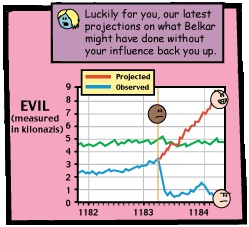 The green line represents a hypothetical offspring of Cruella de Ville and Sauron.note It's useful to have a baseline for comparison for these things.
Instead of going with normal measurement unit names, fiction will make up their own. Expect a guide to have conversions between them and real units.
Advertisement:

In some cases, especially Science Fiction or Sufficiently Analyzed Magic, units will have to be invented where they do not exist in normal speech. Magical energy is likely to have some unit. Particularly well developed settings may even specify what the unit is; for example, one Merlin might be defined as the magical energy required to push a specific object a specific distance.

Compare Hiroshima as a Unit of Measure, where a unit is scaled to a specific object. Compare 20% More Awesome, for abstractions that can't really be numerically quantified. See Microts for units relating to time and Alternative Calendar for different ways of arranging time units.