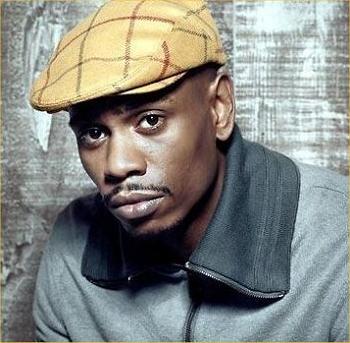 "I can’t even tell something true unless there’s a punchline behind it."
Advertisement:

His first credited role was in Mel Brooks' Robin Hood: Men in Tights as "Ahchoo." He was offered the chance to star as Bubba in Forrest Gump, but he turned down the role, believing that the movie would flop at the box office (a decision he would come to regret). Chappelle wrote and starred in the classic stoner film Half Baked. He is best known, however, for his sketch comedy show on Comedy Central named (appropriately) Chappelle's Show. The show lasted from 2003 to 2006. During this time he came out with several sketches that enjoyed wide success—most famously in which Chappelle plays a disorderly Rick James, driving the phrase "I'm Rick James, bitch!" deep into American culture. Chappelle received two Emmy nominations for his show.

Chapelle's career abruptly ended when he decided the fame was becoming too much and people were laughing at his jokes for the wrong reasons. He took an unannounced sabbatical in South Africa and then returned home to spend time with his family. He made appearances at stand-up stages, on talk shows, and in occasional independent projects, but he showed no desire to reclaim the fame he walked away from at its height.

Chappelle started a comeback in late 2016 by hosting Saturday Night Live, an episode which was acclaimed for being a welcome breather from the particularly nasty 2016 presidential election. Memorable moments included a lengthy opening monologue reflecting on the election’s outcome, a collaboration with Chris Rock for an election night skit, a parody of The Walking Dead featuring Chappelle as Big Bad Negan threatening his classic characters, and a "Last Call" sketch with series regular Kate McKinnon. This was followed by an intense bidding war by various networks to air new stand-up specials from Chappelle, with Netflix ultimately shelling out $60 million for the rights of two unreleased shows and a third produced in 2017 (a tidy improvement from the $50 million his Season 3 deal would have gotten him without the humiliation he felt as well).

In October of 2019, as a tribute to his decades of wit, integrity, societal reflections, and impact on American culture, he received the Mark Twain Prize for American Humor, presented to him at the Kennedy Center for Performing Arts. The award ceremony was broadcast on PBS, and can be partially viewed here

Example of:
It Amused Me