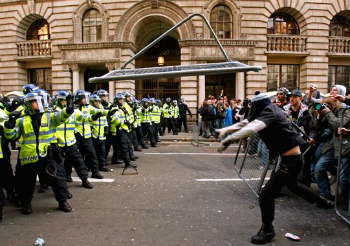 Modern fencing in demonstration.
"Anything can be a weapon, if the man or woman who holds it has the nerve and will to make it so."
— Lan, The Wheel of Time, The Eye of the World
Advertisement:

A creative fighting tactic useful by unarmed people in any situation: Make what's around you a weapon. Even outside the dangerous environments, there's a lot of stuff to try. Anything can be used as a club if it's sturdy enough, and most hard materials will develop a sharp edge if properly coaxed. For comedy value, go as wacky as you like.

Depending on the setting or the characters, there's a lot of options:

More and more video games, especially those with Ragdoll Physics, allow the use of environment items as a weapon. Even in early Brawlers, it was a very useful tactic. In many Platform Games, even grabbing the enemies themselves is an effective tactic.

Superheroes and Humongous Mecha have a penchant for using even larger objects, like light poles, road signs and mailboxes.

A person who uses one of these as their standard weapon may be an Improbable Weapon User. Or a Ninja. Or someone with Homemade Inventions. Improv Fu consists of using this as your main style of fight.

On a larger scale, tools and machines not intended as weaponry can be converted into such, making a Superweapon Surprise. Combat Breakdown may involve this.

Compare Improvised Armour. Also compare Martial Arts and Crafts, which is like this, only sillier, and Abnormal Ammo, where the gun is a normal weapon, but the "bullets" it shoots may be improvised. Revive Kills Zombie is a subversion where normally helpful things like White Magic, medicine, or boo-boo kisses are used offensively.