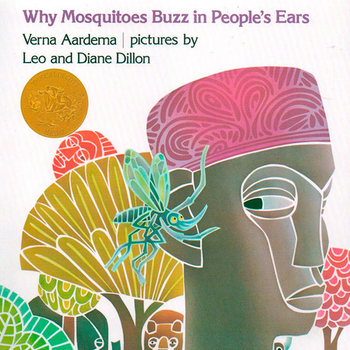 Why Mosquitoes Buzz in People's Ears is a 1975 children's picture book by Verna Aardema and illustrated by Leo and Diane Dillon, inspired by African folklore. It won the Caldecott Award in 1976.

One day, a mosquito decides to tell an iguana a lie about a farmer and some yams. Annoyed, the iguana grabs a pair of sticks and shoves them in his ears, then storms off. The iguana passes a python, who greets him, but the iguana doesn't hear him and continues on his way. The snake, convinced that the iguana is plotting against him, slithers into the nearest hole to hide, which (very unfortunately) happens to be a rabbit's burrow. The rabbit runs for her life when she sees the snake coming, which confuses a passing crow into thinking that the forest is in danger. He sounds the alarm to warn the other animals, and a monkey tries to help him by doing the same thing, but accidentally lands on a dead branch on a tree, which breaks under his weight and falls on one of Mother Owl's baby owlets, killing it. When Mother Owl comes home, she finds her child dead and goes into mourning, forgetting to wake the sun. King Lion calls all the animals to a meeting, and through a reverse chain of accounts, the mosquito is found guilty.

The mosquito happens to overhear everything, so she hides behind a leaf, and is never found or brought before the council. As a result, however, she has a guilty conscience; to this day, she buzzes around people's heads, to ask if everyone's still mad at her.

In 1984, animated short film based on the film was produced, narrated by James Earl Jones.