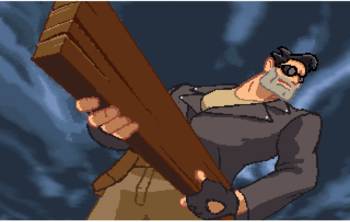 Never mess with a man when he’s got wood.
Advertisement:

The ubiquitous 2×4, (even though it's really 1½"×3½" in real life)* Even more erroneously, this name is also used for 4x4 wood, which are perfectly square and make for perfect improvised clubs found just about everywhere at hardware stores, construction sites, home renovations, garages, and just about anywhere else there's wood to be found. It's an unassuming little item, highly flexible in its possible applications, able to serve as either construction material for building a home, protecting said home against unwanted intrusion... or even an expedient substitute when a baseball bat isn't available. Bonus points if there are nails, screws, bolts or even spikes on the business end for added pain.

This trope covers all other kinds of lumber/timber from wooden poles/sticks, boards, planks, and etc. of different shapes and sizes. As long as it's a piece of construction wood and used as a weapon. Other wooden weapons such as Baseball/cricket bats, wooden clubs/maces or staves/spears have their own tropes.

For some odd reason this weapon is very prevalent in works involving the Zombie Apocalypse used by survivors or raiders and also in Beat 'em Up or any brawls taking place in an urban setting, either in the hands of the good guys or bad guys.

Needless to say, a subtrope of Improvised Weapon. While it may seem the same as Carry a Big Stick, it falls more under Improbable Weapon User category due to the awkwardness that would be encountered when trying to wield a wooden plank/board as a weapon in its standard form.