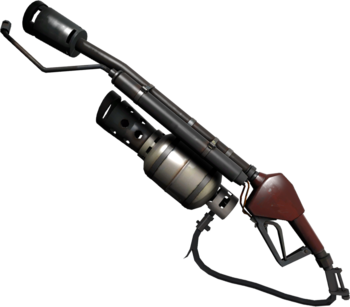 It may not look like much but it'll give you a fiery surprise.
Advertisement:

Want to Kill It with Fire, yet the Aerosol Flamethrower or Molotov Cocktail probably isn't enough? Well, the Homemade Flamethrower has you covered!

This trope is Exactly What It Says on the Tin, a homemade and jury-rigged Fire-Breathing Weapon or generally some kind of weapon or tool that uses or breathes. Created from a bunch of tools, scrap/junk and other doodads, that could feasibly be made into a flamethrower or flame-using tool. The reason this is done is because flamethrowers aren't exactly the easiest things to acquire. Sometimes you'll just have to make one on your own or have someone that's more savvy with tinkering to make one for you.

The weapon can be a godsend, especially if your facing enemies that have a particular weakness to fire. Although do be warned, these weapons are also eligible for Flamethrower Backfire, thanks to their slapdash nature, they are prone to malfunctions and depending on their construction probably won't last very long (either because of fuel concerns or it's not very stable). Given that most ordinary people lack access to napalm, the homemade construction can justify Video Game Flamethrowers Suck.

Commonly if someone isn't really cut out to be some kind of Gadgeteer Genius or do some high-level MacGyvering. They usually settle for the next best thing, grabbing a water or squirt gun and fill the thing with gasoline, oil or other flammable liquid substances. Please Don't Try This at Home, because it's dangerous and it's not exactly practical either, as not only will you need a pilot light, there's a greater chance that the plastic water gun's barrel will just melt because of the flames from the stream or the pilot light itself.

This weapon is a possible Weapon of Choice for Pyromaniacs, mostly because no sane person in their right mind would give a Pyromaniac an actual flamethrower and they wouldn't be eligible to own one anyway.

This type of flamethrower also thrives in societal collapse scenarios. Mostly because in a post-apocalyptic landscape, most flamethrowers are either a rarity, broken or don't really exist anymore thanks to many manufacturers having likely perished during the apocalypse. It could be in the hands of raiders and bandits to harass some unlucky souls just trying to survive or survivors that face situations where burning is the most optimal solution against any threat.

Note this trope can also cover a Flaming Sword, Hot Blade or Matchstick Weapon with a jury-rigged or homebrewed construction to it.

Ash makes himself a flamethrower arm-attachment out of some supplies from a fuel storage to help with his Deadite problem.

Ash makes himself a flamethrower arm-attachment out of some supplies from a fuel storage to help with his Deadite problem.