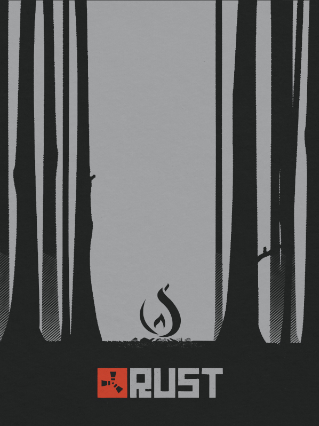 Rust is a first-person, multiplayer-only, persistent-world, Survival Sandbox game. Perhaps unsurprisingly from that description, it started (by the creators' admission) as a DayZ clone, complete with zombies. It would end up developing into its own game, though (without zombies). Even though Steam "Early Access" sales have made it one of the most popular indie games around, its makers considered it to still be in an early alpha stage years after its debut. After years of being in Early Access, however, the game would finally see a full release on February 2018.
Advertisement:

In Rust, you start alone and bare-ass naked in a vast wilderness. Depending on the server, you might not get anything. You do whatever it takes to survive. Aside from killer bears and wolves wanting to eat you, cold, starvation, and radiation will all kill you. You need to gather materials, craft them into tools, and hopefully scavenge some weapons; then you can make fire to keep warm and cook the game that you kill.

Then you will probably get murdered, because everyone else in the game world is on the knife edge of survival too, and they all want your stuff.

Not to be confused with the programming language.