Video Game / A Rose in the Twilight 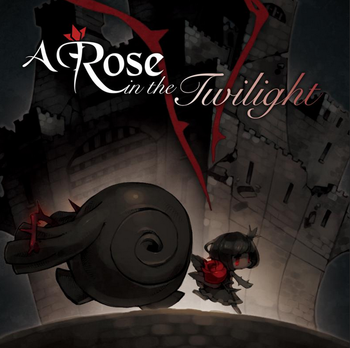 A Rose in the Twilight is a 2-D puzzle platforming game by Nippon Ichi released for the PlayStation Vita and Steam in April 2017. It was created by the same development team behind htoL#NiQ: The Firefly Diary.
Advertisement:

Rising from her slumber, a young girl named Rose finds herself in an old castle frozen in time and devoid of color. Attached to her waist is a mysterious rose capable of absorbing the color red. As she made her way through the castle corridors, she finds a giant creature with a swirl mark on its abdomen. While initially afraid of the creature, she warms up to it when it goes out of its way to protect her. Forming a bond with each other, Rose and the Giant decide to travel through the castle, hoping to find out why she has this rose and answer the many mysteries surrounding this castle.

Players can switch between Rose and the Giant. As the fragile Rose, players use her ability to absorb and imbue objects with the color red. Absorbing red freezes objects in place while imbuing objects with red grants them movement, allowing them to be interactable. The more sturdy Giant is capable of surviving any kind of a hazard, allowing it to move through places too dangerous for Rose, and is strong enough to lift and throw heavy objects. Players need to make use of both of their abilities to overcome the many obstacles in the castle.