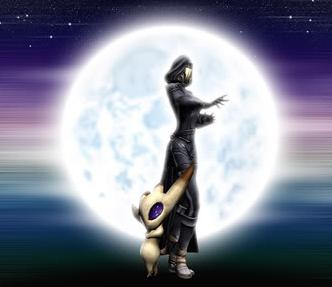 The protectors of Atys.
The Saga of Ryzom is an MMORPG, which takes place on the tree-world of Atys.
Advertisement:

Some 40 years ago, a nest of giant insects (collectively known as Kitins) was discovered, triggering a massive invasion of the Atysian surface, and forcing the four races to seek shelter in the Prime Roots, under the protection of the Karavan and the Kamis. Not much is known about either of these latter groups, except that the Karavan worship Jena and have some really cool technology (including teleportation and resurrection), the Kamis worship Ma-Duk, have yetis as bodyguards, and are resistant to almost all forms of Karavan technology. Neither group likes the other much.

After two years of fighting, the Karavan and the Kamis cleared out the surface world, allowing the Homins to retake it; so now the proud warrior Fyros live in the desert, the regal and expansionist Matis live in the forest, the happy-go-lucky Trykers live on the Lakes, and the mysterious, blue, masked Zoraï live in the jungle. The races maintain an uneasy peace and trade relations, which is not helped by the fact that every race figures every other race are all idiots, but the Kitins are back and everyone is basically screwed if we don't all work together.

You are a refugee; you've made the difficult journey from the Prime Roots to the camp outside the Ruins of Silan, where you can learn how to fight, use magic, craft goods, and harvest raw materials from a representative of each race before you go to the mainland.

The selling point for the game is the amount of customization involved in getting yourself ready for combat. All of your moves are customizable in some way; you can cast spells and use fighting moves from hit points instead of Sap or Stamina, if you want. And the crafting system involves harvesting any of 5 different grades of material, with a quality rating of anywhere from 1 to 250, of any type from seeds to jewels to bark (and there are several different kinds of each) but no metal, and crafting them into jewelry, weapons, armor, and guns. Yes, you can make automatic rocket launchers from the bones of your enemies and sap you dig out of the ground. Mix in some surprisingly detailed herd AI for realism, an entirely-player-run economy, and an almost universally friendly community, and you've got a really good game.

The game's homepage is here

Tropes used in Ryzom include: