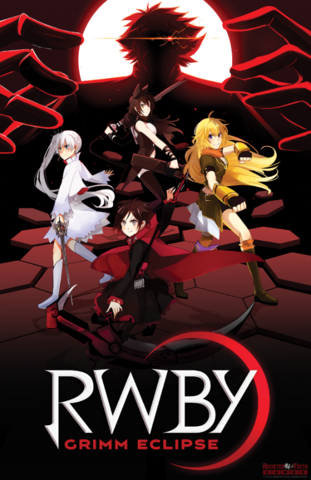 RWBY: Grimm Eclipse is a Hack and Slash game based off Rooster Teeth's animated series RWBY. The game went into early access on December 1st, 2015 and the full game was released on July 5th, 2016. The game is available on Steam here

. The game was also ported to the PlayStation 4 and Xbox One, and was released on their respective digital platforms on January 17th, 2017. On March 25th, 2021, a Definitive Edition was announced to be releasing in May 2021 for Nintendo Switch.

The game allows players to pick any of the four members of Team RWBY and fight against the creatures of Grimm cooperatively online. As players progress through the game, they level up and gain points that can be used to upgrade skills. Each character's moveset includes a Light ground and air combo, a chargeable Heavy attack, a Ranged combo ending with a special projectile, a Team Attack that can be used when a teammate stuns an enemy, and an Ultimate that can clear all enemies in an area.

The game's story involve Team RWBY being asked to investigate why the security network went down in the Emerald Forest. The team manages to fix the network, but discover crates bearing the logo of the now-defunct Merlot Industries, which were seemingly used to transport Grimm. As the team investigates why these crates were here, they discover an evil plan involving the creation of super-powered mutant Grimm.

In October 2016, the game got its first DLC pack which introduced a horde mode and also made Team JNPR playable characters. Further DLC packs have followed.