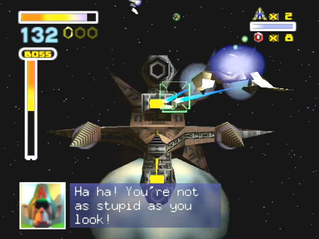 "Well, you found me. Congratulations. Was it worth it? Because the only thing you've managed to break so far is my heart. Maybe you could settle for that and we'll just call it a day. I guess we both know that isn't going to happen. You chose this path. Now I have a surprise for you. Deploying surprise in five, four..."
— GLaDOS, Portal

When a Boss talks to you during combat. Since they usually manage to say anything really important in the introductory cutscene, Boss Banter typically consists mainly of the Boss taunting or mocking the hero, possibly in an attempt to either guile you into a foolish mode of attack or to subtly hint at their weak point. Or, inexplicably, they'll just tell you what attack they're about to use, but that's another trope.

If your heroes are particularly sassy, they may even be willing to trade verbal blows with the villains along with the physical ones.

Related to Enemy Chatter, which is random chatter from Bosses and Mooks alike, and is not necessarily directed at the player character.