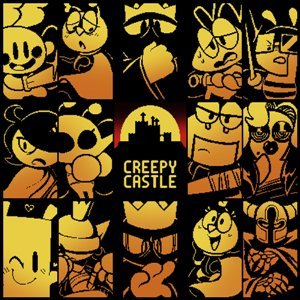 A conspiracy is welling deep within the stone walls of an ancient castle. The keep’s master is leading its denizens to construct a revolutionary new device made to move the world forward onto a new path of evolution.
Advertisement:

Creepy Castle is an Action-Adventure game developed by Dopterra and published by Nicalis that was released on October 31th, 2016. Its development was the result of a Kickstarter campaign

that raised $8,485. The release date trailer can be seen here

The first scenario's plot is about Moth investigating rumors of something suspicious going on at the eponymous creepy castle which will eventually cause him to face Darking and the Heartbreaker. Afterward more scenarios are unlocked where more challenges, playstyles and event awaits you as well as free modes where you can play as the characters you unlocked.

The game aesthetic is inspired from the ZX Spectrum having a limited color palette but more details than what you would see on said system. A big focus is on exploration as the number of both treasure and enemies is limited and leveling up is instead done by finding certain treasures. When enemies are fought, both them and the player character attack, trading blows and losing HPs. Because that would be boring, mini-games will come up with the additional potential outcome of either the player or the enemy doing damage without being countered.

Not to be confused with the 1986 Apple Macintosh game of the same name.

Tropes found throughout the game include: