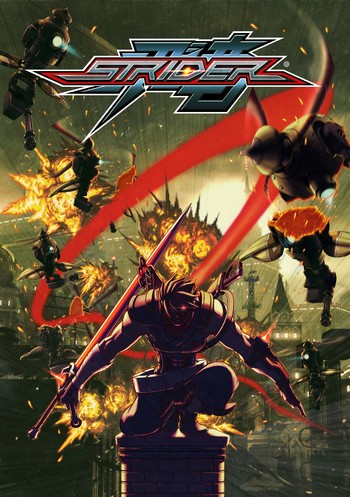 The fourth main entry (or fifth... if you wanna count that one) in the Strider franchise, this game mixes the fast-paced 2D action platforming the series is known for with open-ended, exploration-based level design. It was developed by Double Helix Games, which worked closely with the Capcom team in Osaka, including Koji Oda and Sho Sakai, of Super Ghouls and Ghosts and Strider 2 fame, respectively.

It was released via digital download in February 2014 for PlayStation 3, PlayStation 4, Xbox 360, Xbox One, and on PC via Steam.

A retelling of the same basic plot, it deals with Strider Hiryu as he infiltrates Grandmaster Meio's base of operations to depose and exterminate the oppresive tyrant. With all other members of the Strider program already slain before the story properly starts, Hiryu is left as mankind's last hope against Meio's regime.