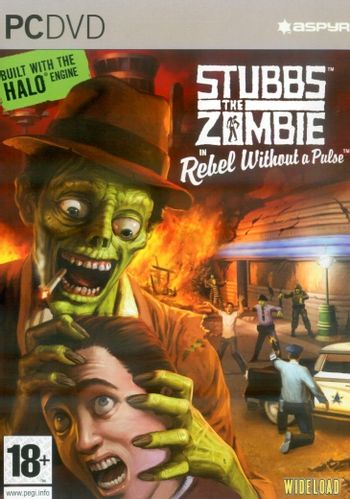 Be safe! Have fun! Eat brains!

Edward 'Stubbs' Stubberfield was Born Unlucky: Barely ekeing out a living as a travelling salesman during The Great Depression, he met his end when he was shot in the stomach by a prospective customer and buried in an unmarked grave somewhere in rural Pennsylvania.

Some twenty years later, Stubbs' lonely grave is now the site of a retro-futuristic utopian city called Punchbowl, founded by millionare-industrialist Andrew Monday. The city is clean, high-tech, and safe... until Stubbs suddenly rises from the earth with a burning desire to eat human brains.

Stubbs the Zombie in: Rebel Without A Pulse is a 2005 Zombie Apocalypse third-person action game for Xbox, PC and Mac with a twist - rather than playing as a human survivor, you are the first zombie, and the entire game basically consists of you lurching around eating brains and expanding the extent of the zombie outbreak. Was made by the same development team responsible for Halo: Combat Evolved, and uses the same Game Engine.