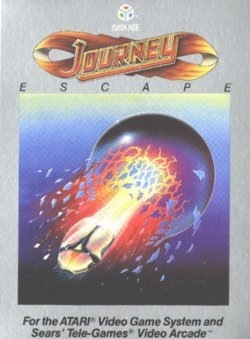 Journey Escape is an Atari 2600 game released in 1982 by Data Age, based on the band's 1981 album Escape.
Advertisement:

In the game, you must lead all 5 members of Journey through waves of pesky characters and backstage obstacles to the Scarab Escape Vehicle before time runs out. You must also protect $50,000 in concert cash from grasping groupies, photographers, and promoters.

The game is notable in its use of the intro for "Don't Stop Believin'" during the cutscene that plays between rounds. Unfortunately, as with other games of that time period that were symptomatic of The Problem with Licensed Games, the game didn't help its publisher to avoid becoming one of the victims of The Great Video Game Crash of 1983.

Bally/Midway would obtain the license of the band to release their Journey arcade game based on the 1983 album Frontiers.