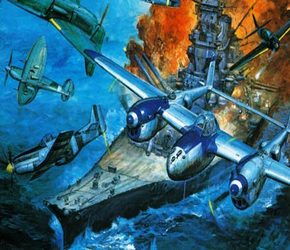 Strikers 1945 is a series of arcade vertical Shoot 'em Up games by the now-defunct developer Psikyo.
Advertisement:

The series is (in)famous for its blend of World War II and Transforming Mecha. As far as gameplay is concerned, Strikers 1945 is made from the same mold as most of Psikyo's other shmups, featuring random order for the early levels, dense and fast bullet patterns, and rather short levels contrasted with long sequential bosses.

Do not confuse with fellow shmup series 1942, although both thematically based on World War II, and Strikers 1945 is generally Denser and Wackier.

The first installment. Originally released for the arcade, was ported to the Saturn and Playstation (both Japan only) and later included as a part of the PlayStation 2 Compilation Rerelease Psikyo Shooting Collection Vol. 1: Strikers 1945 I & II. An emulated version was released for the Nintendo Switch in 2017

The story goes thus: After the end of World War II, a group of disgruntled soldiers called CANY is wreaking havoc all over the world with cutting-edge weaponry, and so a group of elite pilots called Strikers is formed to counter the threat. However, after a few battles, it is discovered that CANY are supplied by a race of crab-like aliens based on the moon.

With regard to gameplay, the game has a roster of six playable planes, each with their own type of shot and Smart Bomb. Collecting power-ups gives you a helper plane, for a maximum of four. Holding the fire button with at least one helper plane will allow you to perform a strong Charge Shot specific for each plane, but your sub-shot will be unavailable during the duration of the attack. As in most Psikyo shmups, the first four levels are randomly ordered each play.

After the defeat of CANY, a group known as FGR recuperated, gained control of CANY's technology and used it in an attempt to start the Fourth Reich. Because of the potential threat, the Strikers team is called back into action.

This installment ditches the hand-drawn sprites of the first game in favour of pre-rendered 3D models and change the charge shot system, from the first game. Instead of being able to perform charge shots at any time with at least one powerup, there is a bar at the bottom of the screen which fills up and augment in power when destroying enemies, but won't let you perform the attack if it's too low.

Ported to the PlayStation and Sega Saturn, the latter only in Japan. Confusingly, the North American release was titled "Strikers 1945", perhaps because the original wasn't released there, save in its arcade iteration. Recently, this game comes back to Android as a free-to-play title in 2014 thanks to Mobirix, APX Soft and Google Playnote as well other Psikyo games like Tengai/Sengoku Blade and Gunbird 2. An emulated version was released for the Nintendo Switch in 2018.

54 years after their first defeat, in 1999, FGR bided their time and developed several new machines. However, as they are about to launch a new attack, a parasitic alien race (implied to be the same ones from the first game) invades Earth and infect all but one of their mechas. With most of the world's military in the control of the aliens, FGR and the Strikers team are forced to team up against the new threat.

The one addition for this installment is the "Technical Bonus" trick. During a specific attack, the bosses will expose a blue orb for a few seconds. Getting close to the orb without being killed will destroy the boss instantly and net a point bonus. Also of note is that the game ditches the anachronistic WWII theme of the first two for the present day. After the free-to-play mobile release on Google Play in 2014, an emulated version was released for the Nintendo Switch in 2019, followed by Strikers 1999/1945 III Classic on Google Play in 2020.

A reworking of Strikers 1945 II for the Neo Geo arcade system. Though it has the same structure as II, the playable cast is a mix of planes from the first two games with one newcomer, the charge-shot system is different, the levels are completely redesigned, two of the bosses are completely changed and the returning ones have more destroyable parts and new attack patterns. It is also noticeably more Bullet Hell than the rest of the series. Later (half-assedly) ported to the PSP and Play Station Network.