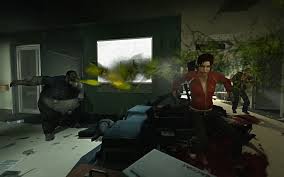 Somebody's gonna have to clean that up afterwards...
"Boomer, don't let it puke on you."
— Zoey, Left 4 Dead
Advertisement:

Zombies are slow, both in the literal and metaphorical sense. So, how do you make them distance threats? No, not Deadly Lunge; give them a ranged attack! But rarely you'll expect them to use firearms or similar, because they're often too mindless to use them. Well, stomach juice, being hydrochloric acid, is strong enough to dissolve certain metals, so how about weaponizing their digestive systems?

Note that it doesn't have to be just stomach juice-infected/corrosive blood; parasites, and smaller zombies are also examples, just so long as they choke them out of their stomachs.

This is used mostly, but not exclusively, in Video Games.