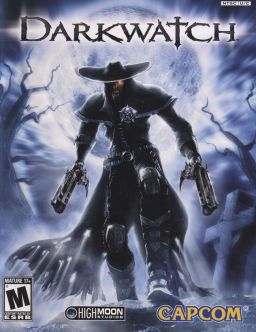 He's on your side, we swear.
"Evil... as old as time, spreads like a plague, corrupting the hearts of men. For millennia, there have been those who have stood against it. A secret organization to protect mankind. They are the frontline in an unholy war. They are...the Darkwatch."
—Opening Narration
Advertisement:

Darkwatch (sometimes subtitled Curse of the West) is a Steampunk First-Person Shooter Videogame developed by Sammy Studios in 2005 (now High Moon Studios, creators of Transformers: War for Cybertron) and distributed by Capcom in the US and Ubisoft in the UK for the Playstation 2 and Xbox.

It's 1876, and an age of darkness has come upon The Wild West. You are Jericho Cross: Gunslinger. Renegade. Outlaw. Behind you lies a bloody trail of robbery and revenge. Ahead of you lies one last train to rob.

Except Jericho couldn't have picked a worse train to rob. This one's owned by the Darkwatch, and the train's cargo is not gold, but a prison cell containing a powerful vampire lord named Lazarus Malkoth, the original founder of the Darkwatch. Young Gun Darkwatch agent Cassidy Sharp tries to stop Jericho from blowing the cell open, but is too late, and Lazarus is freed—and with him comes a terrible curse, unleashing all manner of undead horrors on the Old West. Whoops!

In the process, Jericho is bitten and begins to turn. Now he must find the Darkwatch and help them hunt down and destroy Lazarus or be forever damned.