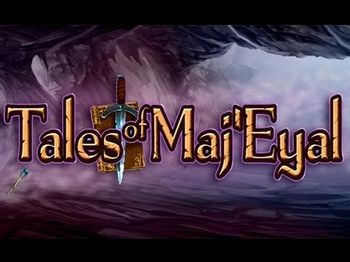 Tales of Maj'Eyal (abbreviated TOME, not to be confused with TOME) is a Roguelike with a long history, stretching back at least 10 years. Originally titled Pernband, it was a variant of the classic Roguelike Angband with Pern influences — although all Pern influences were removed following a Cease and Desist letter in the late 90s. It was then renamed Tales of Middle Earth, the various Tolkien elements refined and perfected, and development continued on it off and on for a decade.

Like its parent game and other games in the genre, TOME revolves around the player character delving into a dungeon with limited resources. What separates it from other Angband variants is its scope — whereas most Angband variants have a single dungeon and small town at the top, TOME contains an entire world map based on Tolkien's Middle Earth, complete with multiple towns and dozens of dungeons, all with different themes. In addition, the game has a quest system, giving the pointless dungeon crawling some actual point.

Another thing that differentiates TOME from early Angband variants (with the possible exception of Zangband) in the genre is the sheer number of classes, races, and subclasses — wish to play as a Vampire Troll Druid? Ok. Barbarian Kobold Monk? Done. Spectral Dwarven Axemaster of Tulkas? Go for it. Each character class / race / subrace has its own ups and downs, and creating interesting combinations is part of the fun.

An attempt to recreate the game from scratch, avoiding some of the development problems of the 2.x line, started and stalled out. In the meantime, the author and primary developer, DarkGod, got married and vanished off the face of the planet, leaving development of the new 3.x line in doubt. Around the same time, a script kiddy broke into the forum's admin account, wiping them clean of ten years worth of posts - with no backups.

However, in 2010 development was restarted after DarkGod returned, resulting in the 4.x line - a complete rewrite of the game. Moving away from Tales of Middle Earth to Tales Of Maj'Eyal to avoid the possibility of a second Cease and Desist letter, as well as making the High Fantasy elements (fireballs and teleportation spells) make more sense.

A "mini" expansion titled Ashes of Urh'Rok was released on October 27th, 2014. It expands on the demon race and their world, Mal'Rok, and adds classes and races focused on harnessing their powers.

A larger expansion pack titled Embers of Rage was released on February 23rd, 2016. It takes place one year after the events of the main campaign. The protagonist of the main campaign, known by the Orcs as the Scourge of the West, has single-handedly decimated the Orc Prides in the Far East. Meanwhile, the Sunwall, now in possession of a Sher'Tul Farportal linking them with Maj'Eyal, has entered an economic and military alliance with the Allied Kingdoms. With their help, almost all of Var'Eyal is now under their control. What little remains of the Orc Prides is now locked in cages. However, not all is lost for the Orcs. Kruk's Pride was left untouched by the Scourge, and remains as the only Orc settlement left. Unfortunately, they are nevertheless facing mortal peril: The Sunwall has them besieged and unable to enter the mainland, and on their island they are at war with the Atmos Tribe, a civilization of technologically advanced giants that are determined to keep interlopers out of their territory. As one of the last few Orcs that remain, your only hope is to reverse engineer the Atmos Tribe's technology and use it to reclaim your land and your future.

The expansion pack "Forbidden Cults" was released on May 16th, 2018.

Be warned: The Embers of Rage section contains unmarked spoilers for the main campaign.

Tales Of Maj'Eyal provides examples of:

The Embers of Rage DLC provides examples of: